According to a survey by Ifop Institute for the newspaper Le Figaro, published on Wednesday, nearly two-thirds of the French (64%) are opposed to the use of BURQINI. Only 6% say they are favorable and the rest (30%) says he is “indifferent”.

France has the largest Muslim community in Europe, estimated at about 10% of its population, and already enacted, based on the “law of secularity”, 1905, laws prohibiting the use of the Islamic veil in schools and the niqab (veil that leaves only the eyes on display) in public spaces and also prayers in the streets.

The images of a middle-aged woman with turban on Nice beach having to remove your shirt with long sleeves in order of four armed policemen gained international attention this week.

The first to demand a “correct attire that respects secularism” was nice, where 86 people were killed in July in an attack claimed by the group calling itself the Islamic State.

More than 30 coastal cities of France, most governed by the right, banned the use of BURQINI.

The burkini is a provocation of a political Islam

Former President Nicolas Sarkozy’s party Republicans (former UMP), who said this week his candidacy for the presidential elections in April 2017, states that “BURQINI is a provocation of a political Islam.” 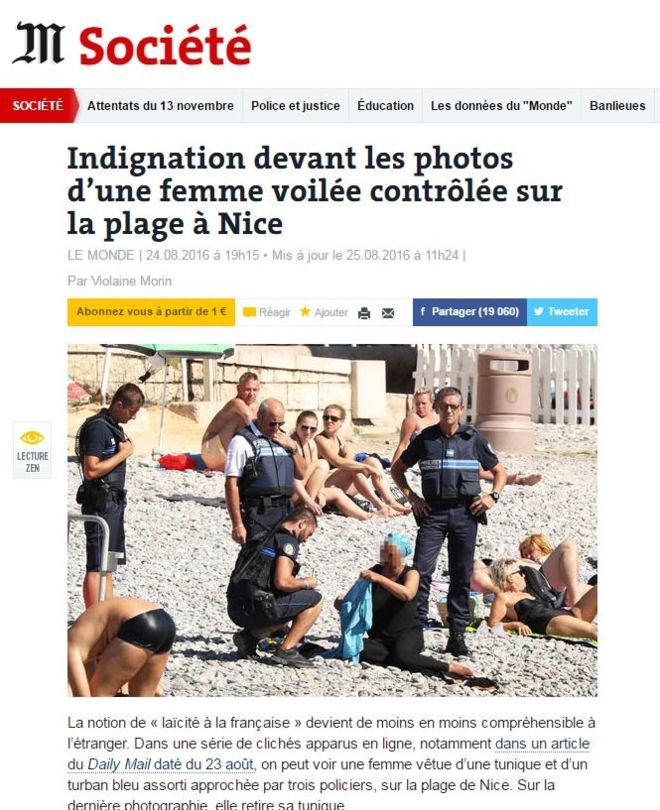 “BURQINI use is a political, militant act. Women who wear this costume test the resistance of the Republic. To do nothing is to think that France is weak,” he says, advocating a national law prohibiting the use of costume.

The French citizen Amélie thickens the chorus of (LXIV%) contrary to BURQINI.
“If you are dissatisfied they return to their country and their culture. Here in France will not be the terror of Islam home. I want to take my children to the beach without that this will bring us constraints”.

The French Prime Minister, Socialist Manuel Valls, the BURQINI is a form of “proselytism and provocation.” According to him, the bathing suit is “a sign of claiming a political Islam that seeks to bring about a setback in the values” of the country.

To Son Darden, 39, born and raised in France, this is just the beginning of acculturation of France, I do not want my children living with this radical people. People have died more in my country, because of this radicalism. I will go to the streets to support the opposite candidate to that sect.

The Minister of Education, Najat Vallaud-Belkacem, born in Morocco, traded barbs with Valls on Thursday to declare that the prohibition of BURQINI raises the question of individual freedoms in France.
“Where do we stop? This frees the racist discourse,” added Belkacem.

The Minister of Health and Social Affairs, Marisol Touraine, daughter of Alain Touraine Sociologist, also said contrary to the prohibition of BURQINI and denounced “a dangerous stigmatization of Muslims.”

“All women are fully dressed in bathing French beaches in the 20th century is disturbing to feminist I am But secularism should not be a rejection of religion:. Is a guarantee of individual and collective freedom,” Touraine said.

The hashtag “BurkiniBan (veto the burkini) has been used tens of thousands of times since the beginning of the controversy, to criticize or defend the veto.